What is the Punishment for Selling Counterfeit Goods in Pennsylvania?

These days, people will do everything possible to avoid buying top name brands, so people ask, what is the punishment for selling counterfeit goods in Pennsylvania?

Even though you can find fake handbags nearly anywhere, doing so supports black market goods, and law enforcement isn’t keen on allowing the trade to continue. As you can imagine, Szar Bail Bonds sees how the process plays out. Continue reading more on this common crime and stay out of trouble.

What is Considered a Counterfeit Good? 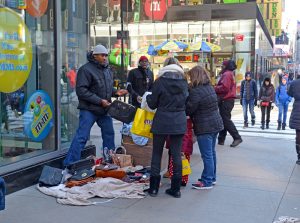 Selling goods on the street

Counterfeit goods are products that mimic name-brand items, but are made with inferior quality materials. Consumers don’t seem to mind, because they can buy fashionable brands at a fraction of the cost. However, these products won’t perform nearly as well, and the real company doesn’t receive money for their design. As a result, people end up with the name of authentic brands on products that aren’t the real deal.

While a million-dollar corporation losing sales doesn’t seem bad at first, there are repercussions. In addition to real-world consequences, it also spurs other illegal activities. Chances are, these products are made by criminal enterprises and are discreetly shipped to your area. Buying them guarantees that your money goes directly to bad guys.

Each year, Homeland Security confiscates billions of dollars in counterfeit goods. Those cases also only involve the products that are known, meaning more items likely remain. However, it isn’t only consumers that end up with fake products. Even government divisions and the military occasionally find themselves with knock-off electronics.

Imagine trying to protect others with devices that don’t work properly. Or even worse, they compromise your identity while using them online, especially in positions of power. It isn’t only fake handbags that cause the law to crack down on counterfeit goods. The only way to prevent their distribution is not to purchase them at all.

What is the Punishment For Selling Counterfeit Goods in Pennsylvania?

Selling fake goods to consumers is illegal, but so is the act of purchasing them. Finding a “good deal” on imitation products can land you behind bars. It isn’t only setting up shop that breaks the law, especially in our state. In Pennsylvania, counterfeiting operations fall into seven different offenses based on your involvement:

First-time offenders may only receive a misdemeanor with repeat actions becoming felonies. Other factors include how many sales, as well as how many items were involved. Offenders can also receive prison time and millions of dollars of fines. When in doubt, put the purse down and choose a reputable retailer.

Many of the same arguments made for supporting pirated movies are used for fake goods. People defend buying or making them as it hurts major corporations’ bottom line. What you don’t see is the industries each purchase supports. These criminal organizations take your cash for laundering efforts or to buy weapons.

Sometimes, these products are used as “dead drops” to trade drugs in plain sight. The bottom line is, you might not be supporting major companies, but you’re supporting international criminals instead.

It isn’t only drug cartels that rely on fake goods for profits. Even terrorist organizations could be behind your favorite knock-off market.

Buying fake products isn’t worth the seemingly great deal that they advertise. Not only are you supporting criminals, but they may also be using you. When you buy their products, they always demand cash and not credit cards. With cash transactions, the change you receive also likely includes counterfeit bills. If merchants deal in fake goods, they likely aren’t keeping good company. They could even be members of organized crime or terror groups.

Don’t go to jail over buying fake goods, and call Szar Bail Bonds if you do get arrested.