Can Police Search Your Phone?

As society becomes increasingly digitized, this is where your personal property becomes blurry. Today, it’s challenging to answer the question: Can the police search your phone? If so, when can they?

Recent crimes cast even more questions on the subject, including warrant practices. While the police might not always access your devices, the court may decide when they can.

Continue reading on to learn more about your phone’s privacy rights. Szar Bail Bonds is here for you throughout Pennsylvania, 24-hours of every day.

When Can Police Search Your Phone?

When, where, and how law enforcement can search your property depends mainly on the situation. Probable cause is the catalyst for whether you receive searches and when. 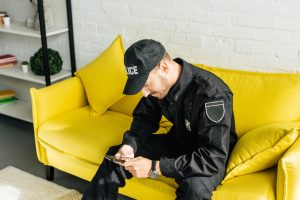 If you get pulled over with the suspicion of substance use, officers can search vehicles. That is because they know they will likely find evidence, and it’s hard to deny. However, if an officer randomly demands to see your phone, they don’t have the authority. Individuals are protected from search and seizures by the Fourth Amendment.

Unless an officer has a warrant, they likely can’t access your phone or other devices. However, if they do find it after you tossed it out a window, they can search through it.

The topic of when and how law enforcement can access devices peaked in 2016. Two terrorists linked to the Daesh death cult fired on a county facility in California. Later, the two attackers were killed by the police in a shootout. Although an iPhone was recovered, not even the FBI could crack it.

Apple came under intense pressure to provide a backdoor but refused based on ethics. Their phones are specifically engineered to prevent such a request from happening. Eventually, law enforcement finally cracked the code after several months. While the investigation moved forward, the case did little to quell future requests.

Who Can Give the Police Information?

Thanks to the ruling of U.S.A. v. Joseph Sam, your phone is private property. Even if police see a notification on your lock screen, they cannot access your information. On the other hand, your Internet Service Provider (ISP) is a different story. Under the Stored Communications Act, companies who collect data can distribute it.

Using the Internet to commit crimes is illegal, so you are breaking their service terms. As a result, they can freely offer any information that leads to your arrest. That becomes necessary for severe cases such as child pornography, trafficking, or accessing digital files.

Police Shouldn’t Search Your Phone, Even When Under Arrest

Chances are if you find yourself in handcuffs, police want to see your phone. However, if they do not have a warrant, you should not allow them to do so. Even if they have you behind bars already, cops do not need access. Unless they have explicit authority from a judge, they are out of luck.