What is an Arrest Warrant?

Some people think that if they make it home, they can’t get thrown in jail. Unfortunately, knowing what an arrest warrant is prevents playing life like Grand Theft Auto. In short, a warrant is a written order by a judge for your arrest. While they may not have seen you commit crimes, they have enough evidence for charges.

If you have recently been arrested by an arrest warrant, call us for bail. Szar Bail Bonds provides 24-hour service agents to any facility in Pennsylvania.

Who Can Authorize an Arrest Warrant?

An arrest warrant states who is to be taken in and for what pending charges are against them. They may also include restrictions with a time period that a person can be arrested. Only judges or magistrates can authorize them, so they are also called “bench warrants.” Some even specify whether or not the arrested party will qualify for bail.

To secure a warrant, it requires a sworn affidavit by the would-be arresting officer. If they can’t specify why one should be issued, then it likely won’t be issued. The amount of probable cause is what ultimately determines if arrest warrants are issued. Without it, there isn’t much of a case for law enforcement to pursue.

What Happens if an Arrest Warrant is Issued in Error?

All people can make mistakes, even judges, magistrates, and police officers. That can also mean that you find yourself arrested by mistake. Oftentimes, that is something as minor as misspelling a name or transposing address numbers. Therefore, in the heat of the moment, those being arrested understandably become upset.

The good news is that it should be somewhat straightforward to verify your identity. While instincts may encourage you to resist, don’t fight it. That way you can explain the situation and prove there has been a mistake. 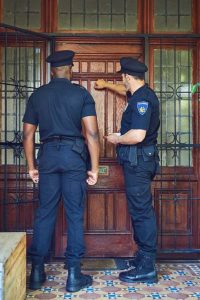 Although it’s a huge inconvenience and emotionally disturbing, you don’t want to bring on unnecessary charges for yourself. It’s way too easy to get slapped with a charge of resisting or even assaulting an officer while being handcuffed if you fight back.

Can I Show My ID to the Police?

In a perfect world, the police knock on your door and explain the situation and you calmly show officers some ID and clear the matter up. Unfortunately, things rarely play out that easy, especially for severe crimes being committed. If law enforcement feels you may be dangerous, they might employ less obvious tactics.

If they obtained a warrant for your arrest for murder, they want a fast capture. Petty offenses, on the other hand, aren’t as dire or as dangerous to the officers. The best action to take is to let the police bring you in. There, you can better explain why officers have the wrong person with your specified identity.

Have You Received an Arrest Warrant Recently?

Once you are arrested, the police hold you in jail until your trial. That is unless you can post bail first to head home and prepare.

You don’t need the full amount when you choose us for a bail bond. Contact us at Szar Bail Bonds for local 24-hour service agents.