What is Excessive Bail, and Who Must Pay It?

The constitution has strict guidelines regarding possible inmate punishments. Although it speaks against issuing them, what is excessive bail, and who must pay it? Some people are jailed just to find themselves with astronomical fines to cover. Oftentimes, it’s from a judge believing that the person will put others at risk.

When you can’t post bail on your own, turn to us at Szar Bail Bonds for 24-hour agents. Continue reading more about excessive bail and why it exists.

Defining What is Excessive Bail

One reason why we want to speak about excessive bail is because there aren’t explicitly defined amounts. The Eighth Amendment reads: “Excessive bail shall not be required, nor excessive fines imposed, nor cruel and unusual punishments inflicted.”

Who determines what is “excessive” or even “cruel and unusual”? During the Second Red Scare, these ideas were put to the test. Fearing a Communist takeover, many legal professionals sought indefinite sentencing and higher bail amounts. It wasn’t until Chief Justice Vinson called the practice improper that changes started to happen.

What is Excessive Bail by Today’s Standards? 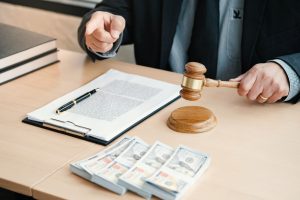 Higher bail costs are used for especially risky inmates who could harm others. However, when it’s evident that amounts are well over what is obtainable, it can become excessive. These amounts are at the discretion of the initial judge seen after an arrest. Having these fines reduced would likely need more time and labor from attorneys.

Can I Leave if I Pay My Bail Amount?

Bail’s intended use is to provide a way for inmates to prepare for their trial. However, it is also easily used to keep lower-income inmates behind bars. Worst still is that their initial jail sentence is only to confine them. These inmates may even receive a prison sentence after their trial finishes.

Generally, your bail is often closer to what your annual salary might be, but that doesn’t mean that posting it is easy.

Refusing an inmate’s bail is tricky, because it’s a fine line between protecting the public. Unfortunately, it could also mean violating a person’s constitutional rights in jail.

Those who commit misdemeanors often have low bail amounts and fewer punishments issued. Harsher crimes, like felonies, will affect the likelihood of your release conditions. If someone committed an especially heinous crime, they might not be released at all. Judges use the term “flight risk” to determine how dangerous a person might become.

Why Some Courts Do Away with Bail

As more Americans are incarcerated, many in the legal field wish to see bail abolished. The practice also seems especially stacked against minorities when compared to their white counterparts.

The same crimes committed by two inmates are often charged differently, especially from racial biases. Hollywood actors who go on public benders quickly draw these comparisons as well. Although you are innocent until proven guilty, bail denial can already work against your favor. Many inmates plead “guilty” just to get out of jail sooner, ruining their reputation.

Finally, the most crucial question for those that are incarcerated is how to post their bail. In short, most amounts are paid in cash, although other arrangements can be made. Some judges will allow property, assets, or other alternatives in place of money. Others will insist that the payment is made in cash only.

Most often, inmates turn to bail bonds providers, like ours, for their release. These loans will get you home faster at affordable repayment plans over total payments.

We know posting bail isn’t always an easy process. When you need to make payments now, you need our agents.