What Happens If You Lie Under Oath?

does beg the question though, what happens if you lie under oath? In real life, the judge or jury doesn’t find this behavior as charming, and it will definitely make your case harder to prove with such antics.

Szar Bail Bonds sees the fallout of those trying to get over on the law. Continue reading why lying under oath is never a wise decision.

What is Considered “Perjury” in Court?

Perjury is a crime committed once a witness becomes sworn in. By intentionally representing false information, someone is knowingly attempting to throw the case.

Let’s say your cousin got arrested for attempting to mug a stranger. Even though you know that they did, you think about casting doubt to protect them. Doing so, will only land you in jail as well. Perjury is a severe crime and one that is punishable by several years in prison.

Although there are instances where confusion and misremembered details are dismissed, intentional lies are punished. When in doubt, simply answer every question truthfully to avoid further punishments.

What Happens if You Lie Under Oath?

Before anyone can testify, they must swear only to speak the truth and nothing but the truth. At this point, everyone is advised to avoid embellishments or half-truths, and outright lies. However, that isn’t always enough to deter those who would misinform the judge or jury. While it may be possible to do so successfully, it likely won’t.

Any defender worth their salt knows when others aren’t telling the truth. After a few lines of questioning, they’ll have you backed into a corner. Once lawyers reveal that you were dishonest, the judge won’t hesitate to punish you. At a minimum, you’ll receive contempt of court or could face a felony altogether.

Does Perjury Only Happen in the Courtroom? 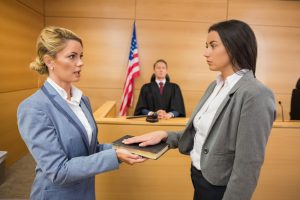 Witness taking an oath in the court room

To the dismay of many, you don’t need to be a witness to commit perjury. Anytime a citizen signs an official document knowingly with misinformation, they can be charged. When you mail your tax returns back to the IRS, you sign it, claiming its accuracy. If they discover that you didn’t claim all of your income, they’ll bring about punishments.

Another situation that this occurs frequently is with child support payments. When the parent underscores their net income to avoid costs, it is also perjury. Anytime your name is attached to an official document, you claim the truth. Make sure that you aren’t lying the next time you sign something.

Does Perjury Happen a Lot?

For as long as there have been judges, there has been perjury. Although you hope people will do the right thing, they don’t always do. Many people round down on their tax returns, making it challenging to charge everyone. Usually, it’s the most blatant of liars that get caught.

That said, we live in a time where anyone can fact check everything in real-time. That alone, makes it nearly impossible to get away with, especially in front of others. Perjury isn’t something that happens in every case, but it does occur frequently enough. That doesn’t mean that it stops being a felony offense.

How Do Lawyers Know You Are Lying?

Experienced lawyers know how to read body language and non verbal cues, so when you aren’t staying truthful they can see right through you. Worst yet, they know how to corner you with logic until the truth is revealed.

First, they determine what behaviors of yours are “normal” in order to compare them to unintentional reactions. Those who stay calm and cool usually only get nervous when they’re being found out. They should have also prepared research before the trial, meaning they already have the answers. Their questions are to steer the defense towards the truth to discredit you.

The best way to carry yourself in court is to stay truthful. Leave jail now to prepare your case with Szar Bail Bonds’ agents.