Can a Felon Join the Military?

There is no cut and dry answer to whether a felon can join the military. The needs of the armed forces change weekly, sometimes daily, and many details change regarding felony charges. The entire question is a huge grey area, so the phrase of utmost importance is “enlistment recruiters discretion.”

The military thrives on the assumed moral high ground. Most often, they’ll see a felony as a red flag. That doesn’t mean you’re automatically disqualified, but you’ll have more hoops to jump through. Depending on your felony charges, the details, and the quality of your character references, you can request a waiver.

However, you will need to prove that you’ve learned a lesson and adjusted well to your post-incarceration life. If you can show beyond a reasonable doubt that you’ve turned your life around and can be trusted, you have a shot at enlisting.

Certain criminal charges will disqualify you from joining any branch of the military. There will be no exemptions or waivers given for certain crimes, no matter what you’ve done to prove that you’ve changed your ways. Felons in the military are a liability. The military takes your past seriously. Criminal convictions that will kill your enlistment process include: 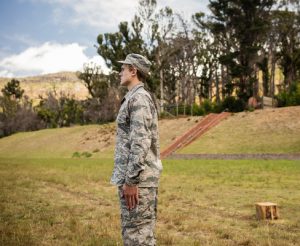 During times of peace, the military usually tightens their standards significantly. They know from experience that enlisting large numbers of people with previous disciplinary issues can lead to recurring discipline issues in training. Standards are held high during peace times because the military can afford to be selective.

When the military is desperate for boots on the ground, they’ll loosen the standards and allow a much wider variety of individuals to enlist. The military knows that wartime military service brings a death toll, and are willing to enlist more people with spotty records because they know many may not make it home.

This may sound harsh, but when you boil it down, the military is a business that deals with people performing services. They look at their enlistment recruiting goals based on the needs of the current political environment. If we’re at war, you’re more likely to be accepted into the military.

If you are pursuing a waiver, you’ll need to work through a lot of red tape. Ask your recruiter about the process and start speaking to your community’s pillars to gather letters of reference. Clergy, community officers, employers, educators, and other similar people will have a higher impact on your enlistment prospects than friends and other criminals.

Applying for a waiver will in no way guarantee that you will be granted one. If your felony conviction took place before you became a legal adult, you have a higher chance of gaining enlistment than if the crime took place once you were of age. Youth minds are more susceptible to making mistakes, and the military understands that mistakes that are made in childhood can help shape adults. If your legal behavior since release has shown moral growth, you’re likely to gain an exemption or waiver.

When you’re arrested, you may have the option of posting bond and being released on bail until your arraignment trial. Maintaining your employment during the trial process will be in your favor and help your case.

Szar Bail Bonds is here to help you with your bail, even if you can’t afford it out of pocket. We will work with you and your lawyer to find a solution. Discuss your ability to apply for a bond with your lawyer and give us a call today.