What’s the Difference Between Being Detained vs Arrested?

When you find yourself in handcuffs, you want to know how much trouble you’re in. It’s also helpful to understand what the difference between being detained vs arrested is.

While they are similar, they have much different outcomes for the person in custody. And because of infamous tactics like Stop and Frisk, it’s essential to know the difference. You also don’t want to make a bad situation even worse or incriminate yourself. Sometimes, you can refuse a police search, while others not so much.

Continue reading to learn more about when you find yourself in trouble with law enforcement. And when you need 24-hour bail bond agents in Pennsylvania, choose Szar Bail Bonds.

What’s the Difference Between Being Detained vs Arrested by Law Enforcement?

While it may not seem like a stark difference, being detained is separate from being arrested. When you are being detained, the officer is just wanting to ask you some questions about the situation. At this time, you may be put into handcuffs, but you are not under arrest yet. It’s more of a precautionary measure to stop possible suspects from fleeing. They may also go so far as to place you into their squad car. 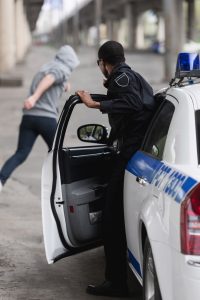 However, if they determine you committed a crime, a detainment can quickly become an arrest. If, after questioning you, and they feel that you did nothing wrong, officers may release you on the spot. Until they formally place you under arrest, you are only being detained.

When you’re detained, it’s because an officer believes you may have broken the law. At this point, there isn’t enough evidence to warrant a full arrest. This means you likely must answer questions about what you are currently doing and the situation at hand. Unless you have a reasonable excuse, you could end up heading to the station.

The police need to find probable cause in order to issue an arrest. If officers cannot determine whether a crime was committed, they should release you soon. If at any time you feel confused as to whether you were arrested, ask. Questioning if you are free to go or under arrest will force officers to respond.

What is an Arrest?

When you are formally arrested, it is because they have found probable cause. Maybe officers asked permission to search your things, or they had a warrant. Whether they found illicit items or stolen goods, it’s enough to charge someone. Now, when you get placed in handcuffs, it is to hold you indefinitely.

Once in custody, an officer will read you your Miranda Rights. Next, you’ll be booked and processed, including mug shots and taking fingerprints. A preliminary judge then sees you to determine your bail amount and court date.

Finally, you’ll either stay behind bars, or you’ll post bail and await your trial. At this time, you are innocent until convicted by a judge or a jury. While detention may not appear on a record, an arrest certainly will.

Can I Refuse the Search of My Property?

Your personal property can be anything in your pockets, vehicle, or your residence. However, what about your Fourth Amendment rights against search and seizure? Unfortunately, all an officer needs is your consent, meaning, they ask, and you agree. By then, you’ve already given permission, and they will continue until satisfied.

If, however, they have probable cause of a crime, they can do so anyways. Officers may see evidence of drugs or weapons in the front seat, tipping them off. Drivers also have a reduced expectation of privacy, and courts often side with the police. Compared to your home, they don’t require as much formal documentation to inspect your vehicle.

Bail Out After Getting Arrested

If you happen to find yourself formally arrested, you’ll want to be released. Unfortunately, the cost of bail is often tens of thousands of dollars.

The easiest way to get released is with local surety bond agents. Contact us at Szar Bail Bonds for 24-hour services throughout Pennsylvania.